Ranieri: I hope that Conte will win the title

Head coach of Leicester City Claudio Ranieri said he would be happy if his compatriot Antonio Conte will lead the London Chelsea in the Premier League league title. After the 21 th round of the blue in the lead in the standings of the Premier League table. Last year was the champion of England Lester.
"As a former trainer of Chelsea and a fan of Italy, I hope that Conte will win the title. He proved that the Italian school coaches as strong as ever", - said Ranieri.
No comments:

Klopp: I knew that Mkhitarian wants to play for Manchester United

Liverpool's head coach Juergen Klopp commented transition midfielder Henrik Mkhitaryan in MU. Klopp has worked with Mkhitaryan at BV Borussia Dortmund.
"Yes, I have worked with Mkhitaryan, and when you worked with a player, you already know its capabilities. In such cases, I want to learn something new about other players. I knew that he wants to go to Manchester United. In such cases, you know all the strengths and weaknesses of the player. Not that it's boring, just you know everything about them, but while they develop and improve? Where's the next step, where they develop?
We could try to sign many players. But first we must understand very, exactly whatwe need," said Klopp.
No comments:

Zidane: Morata is not for sale

Head coach of Real Madrid Zinedine Zidane said that the Madrid's Club is not going to let Alvaro Morata, despite interest by English teams. The most serious interest to Morata showed Chelsea, with which Real Madrid met in the framework of the international Champions Cup.
"Morata belongs to Madrid. We are delighted that he has returned to his native home. It should stay here."
Zidane also commented on the situation with another striker of Real Jese.
"Jese have been negotiations with PSG. I can't tell you more because I don't know anything more, but that's why he hasn't played with Chelsea. However, no formal agreements yet", - said Zidane.
No comments:

Cristiano Ronaldo: I will not go to dinner with Gareth Bale and Karim Benzema

Footballer of Real Madrid Cristiano Ronaldo shared his opinion about the importance of internal relations for the overall team score.
"What I can say in response to the assertion that the friendship off the pitch, as in the case of Lionel Messi, Neimar and Luis Suarez, has a special meaning? My answer is an example. When I played for Manchester United, I was not a friend of Ryan Giggs, Rio Ferdinand and Paul Scholes, but we had an amazing team that won the Champions League. I will not go to dinner with Gareth Bale and Karim Benzema, but it is not so important. What matters is what you do on the football field" - said Ronaldo.
No comments:

David Luiz: The victory is the victory

Defender of PSG David Luiz shared his opinion about the match with Chelsea (2:1) in the framework of the 1/8 finals of the Champions League.
"The victory is the victory. It gives us an advantage. But the Chelsea a great team. We gave all the game, but could do more. But we controlled the ball, and most importantly - we managed to win," - said Luiz.
No comments:

Gareth Bale and Emma's long history of love: they met as teenagers, since the football club Real Madrid is dedicated to her hearts, which depicts the hands after the goals scored. Couple brings daughter Alba Violet. Gareth - one of the most secretive players, he does not admit to himself and his family the paparazzi and journalists, so the press is very little scandals associated with the name of the player.
Gareth Bale, in addition to being one of the best players on the team Real Madrid and Wales, even to the same excellent family man. Family oriented Bale is so good, that does not admit on a gun shot to his girls no annoying photographers or journalists. But we unveil the veil of secrecy, and introduce you to the family of Gareth Bale. 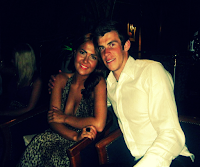 Gareth Bale married. And for a long time and seriously. Her name is - Emma Rhys Jones. And Gareth's love for his wife is so great that he even invented and patented the so-called «man-made heart» which Bale again demonstrates each and devotes Emma after each goal scored.

By the way, Gareth argued for the right to patent man-made heart with Justin Bieber, and got to the heart still recognized him. The matter went to court, which in Bale Bieber won. Intellectual Property Office has registered the rights to Bale's logo. Now Gareth demonstrates his «man-made heart» and dedicates it to his wife with a clear conscience.
The love story of Bale and Rhys Jones began when they were teenagers. Ever since Gareth strongly and passionately in love with his wife. In 2012, in October, the couple had a daughter who was named Alba Violet.
No comments: 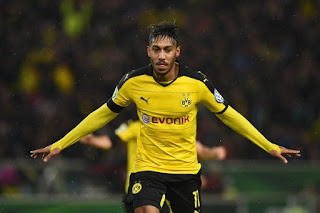 Striker of Borussia Pierre-Emerick Aubameyang hit the sphere of interest of Manchester United. At the end of the season the English club is ready to pay for a 26-year-old footballer 70 million pounds (90 million Euros).
Manchester United is considering an Aubameyang along with Robert Lewandowski (Bavaria), Neymar (FC Barcelona) and Gareth Bale (Real Madrid), but the acquisition of striker is considered more likely.
It is noted that this week, during a meeting with shareholders, the vice-president of MU Ed Woodward has announced that in the treasury of the club formed a reserve fund in the amount of 120 million pounds, which will be used to buy star players.
Recall that in last year Aubameyang was named the best player in Africa.
No comments: 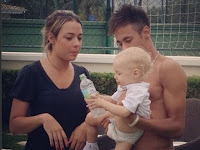 Wife of Neymar - the last stage in the life of a footballer in?

As it is known, the Brazilian striker Neymar (who now plays in the FC Barcelona), very early became a father - he was then 19 years old. Baby's mother was younger, Carolina Dantas (which at that time was 17). Neymar is not only a talented footballer, but also a young father, he was very much family oriented. But soon young couples became not able to maintain their relationships, and even a child could not keep them together. But the son of Neimar become a real source of joy and infinite love, joy and happiness. His name is David Lucca. Pretty baby with blonde curls. Neymar is very fond of David, and spends a lot of time with the child. Also footballer likes sharing jointphotos with his son on his Instagram account.

Inspired by the example of his older teammate, Lionel Messi, who worships in his child, Neymar also began seriously care about fatherhood. Of course, Neymar's son attends football matches eminent Pope, he has a form of children's football, FC Barcelona, Neymar loves to show off with the baby in front of reporters. 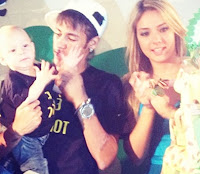 This is awesome- because Neymar is doing everything for being a good father.
Neymar, like another man, was in such a situation to marry. Neymar's wife Caroline has done it before him- a mother of his child. However, marital happiness did not last long: after a while Neymar having an affair with another girlfriend, and Neimar's wife remained in splendid isolation to bring up his son. After Neymar has had many new girlfriends, sexier one another.

What kind of relationship does Neymar have with his wife now? 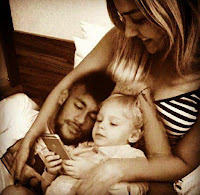 If it was not a common child, Neymar and Caroline would hardly have met or communicated. Moreover, it is unknown in general, they wouldn't be married. But Neymar is very fond of his son, David, Luke, and therefore constantly forced to communicate with his ex-wife.

Neymar and his wife for the sake of the child's support and good relationships do not hold a grudge against each other.
No comments:
Older Posts Home
Subscribe to: Posts (Atom) 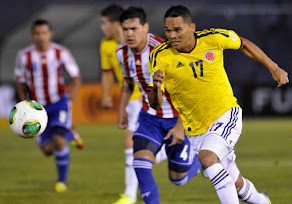 Ranieri: I hope that Conte will win the title

Head coach of Leicester City Claudio Ranieri said he would be happy if his compatriot Antonio Conte will lead the London Chelsea in the Pr...

Photo Of The Day 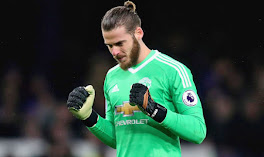